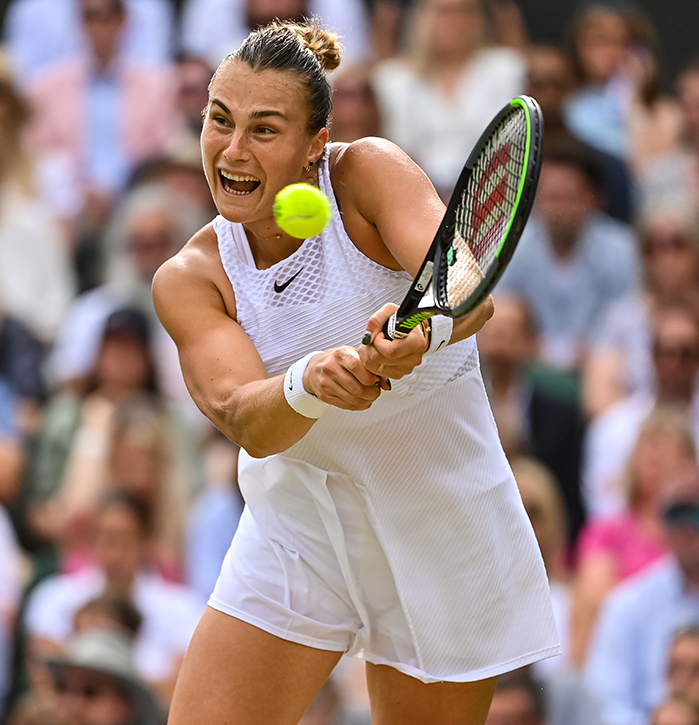 Novak Djokovic, speaking at the Serbia Open in Belgrade, said he couldn’t support Wimbledon’s decision and called it ‘crazy’.Getty Images

Wimbledon’s decision to ban “all players from Russia and Belarus” is the first of its kind in sport and has “provoked an angry reaction from sports figures”, according to Stuart Fraser of the LONDON TIMES. The ATP, which manages the men’s circuit, said: “This unilateral decision is unfair and has the potential to set a damaging precedent for the game.” He hinted that he “may seek to fight the Wimbledon decision, which will also apply to the various Wimbledon warm-ups, such as the Queen’s Club Championships and Eastbourne International”. Novak Djokovic at the Serbian Open in Belgrade said: “I will always condemn war. … However, I can’t support Wimbledon’s decision, I think it’s crazy.” He added: “Players, tennis players, athletes have nothing to do with it (war). When politics interferes with sport, the result is not good.” The WTA, which operates the Women’s Tour, also issued a statement “opposing the decision”. The All England Club is also in the process of “withdrawing television rights from broadcasters in Russia and Belarus, and will refuse accreditation requests from journalists working for media associated with these countries”. It is the “first time that Wimbledon has imposed a ban on specific countries since German and Japanese competitors were unable to participate in the tournament in the aftermath of World War II” (LONDON TIMES, 04/21).

FAMILY DISUNITY: In New York, Christopher Clarey wrote that professional tennis, which had been “united lately”, is “back at odds after Wimbledon’s bold and difficult decision to ban Russian and Belarus players”. For just over 50 days, the ATP, WTA, International Tennis Federation and the four Grand Slam tournaments “all agreed” that the appropriate response to Russia’s invasion of Ukraine, with the support of Belarus, was to “ban Russia and Belarus from the team but allow their players to continue to compete as individuals, but without national identification.” But Wimbledon “broke ranks” yesterday, and “may remain an outlier” on this issue among Grand Slam tournaments. French Open leaders “showed some backstage resistance to Russians competing as individuals in Paris, but made no move towards a ban.” The USTA said yesterday that “no decision has been made regarding the participation of Russian and Belarusian players in this year’s US Open” (NY TIMES, 4/21). In London, Simon Briggs writes that tennis has “always been a uniquely atomized and dysfunctional sport”, but this is the day it “descended into a veritable civil war” (London Telegraph, 4/21).

MISS THE MARK: SI.com’s Jon Wertheim wrote that Wimbledon “made an outrageous unforced error”. All other tennis tournaments “have vigorously avoided taking this step”, in direct contradiction to the position of the ATP and WTA. This ban “will impact dozens of players”, and according to today’s rankings, “more than 20 eligible singles players have been banned – many more in doubles and juniors”. Wimbledon essentially said that individual athletes – who “can no longer even reside, let alone vote, in their country of nationality – can be punished for the acts of the ruler of that country”. This is “the banning of independent contractors, none of whom compete with funding from their country of origin”. It is “not clear whether this problematic policy will have the desired effect”. If the goal is to support Ukraine in general, and Ukrainian players in particular, “surely there are ways to do that that don’t exclude other competitors” (SI.com, 4/20). Tony Dokoupil of CBS said “you can understand the desire to sanction Russia, but hitting individual Russians seems like a bad decision to me” (“CBS Mornings”, 04/21).

HUGE EGO? USA TODAY’s Dan Wolken writes that while Wimbledon came to this decision with the belief that it “somehow punishes Russia or will pressure prominent Russians to speak out against their government “, then the only conclusion to be drawn is that “the most important tennis tournament in the world tournament has too high an opinion of itself.” They “do not deceive anyone here, let alone Vladimir Putin”. The complete lack of impact this will have on actual warfare is “just one of many reasons why banning a handful of players under these circumstances makes absolutely no sense and could potentially lead the sport down a dangerous path. There is” certainly a point to make that banning the Russian team from the Davis Cup or the Billie Jean King Cup is entirely appropriate.” But when Daniil Medvedev steps onto the court at an ATP Tour event or a Grand Slam as a professional athlete nel, he “does not carry a Russian flag”. Instead, the only loyalties to his body “belong to Lacoste, racquet maker Technifibre and BMW” (USA TODAY, 04/21).

GOVERNMENT INFLUENCE: TIMES’ Clarey notes that Wimbledon “has come under considerable pressure” from the UK government, led by Prime Minister Boris Johnson, to “take a tougher stance” (NY TIMES, 4/21). In London, Jeremy Wilson writes that there were “fears” that Medvedev would win the tournament. This led to “the optics of a potential trophy presentation on center court” being “high in the minds of decision makers”. The presentation “often involves members of the royal family”. The UK government has previously indicated that Russian and Belarusian players “should speak out against Vladimir Putin’s regime to compete at Wimbledon”, but there were “serious doubts as to whether this was ever a realistic proposition” (London Telegraph, 4/21). ESPN’s Patrick McEnroe said that “the idea of ​​presenting the Wimbledon trophy, one of the greatest moments, arguably the greatest moment in tennis on center court, the hallowed ground of the All-England club, to a Russian or Belarusian player, I think that’s something Wimbledon just didn’t want to risk. McEnroe: “This idea that sport is not political, we can throw it out the window over the course of two last months” (“Anderson Cooper 360,” CNN, 4/20).

CREATE A PRECEDENT ? TENNIS.com’s Drucker & Tignor wrote that the decision is “unfair to athletes – and sets a dangerous precedent”. Drucker & Tignor: “Should similar action be taken with athletes from other countries whose leaders go to war or engage in questionable human rights practices?” The slope is “slippery beyond belief”. It is felt to have been ‘driven less by the All England Club and more by UK government leaders, notably UK Sports Minister Nigel Huddleston’. The spirit of the professional tours has “always been that players compete for themselves and under their own name, rather than the name of their nation”. The ATP, WTA and PTPA should “at least reflect, discuss and consider some form of action that goes beyond mere silent acceptance”. Wimbledon’s action puts it in “direct conflict with the rights of individual players” (TENNIS.com, 4/20).

ULTIMATE CONSEQUENCES: In Toronto, writes Cathal Kelly, even if this is prolonged, it “will create a ripple effect that every professional league and every team employing Russian players will have to reckon with (which I hope is the ultimate goal of do it).” Kelly: “Should average Russians be ostracized in the world because of the crimes of their government? No, I don’t think an unbiased person believes it (yet). … But you want to travel the world carrying a huge megaphone, making huge amounts of money, representing a murderous regime that the rest of us will probably be at war with in five years from now, if we aren’t already? “It’s “not a hill I’m willing to wear myself out on, too bad to die” (GLOBE & MAIL, 04/21).

THE NECESSARY MEASURES: At DC, Sally Jenkins writes that Wimbledon “did exactly the right thing”. It is a “necessary message: even the most innocent Russians will pay the price for the rapacious actions of Vladimir Putin’s regime”. Putin “cultivates enormous national prestige through the success of Russian athletes”, whom he “treats as elites and uses extensively in his triumphalist narrative to the Russian people”. Sports ostracism is an “effective way to penetrate Putin’s total control over Russia’s war narrative” (WASHINGTON POST, 04/21).