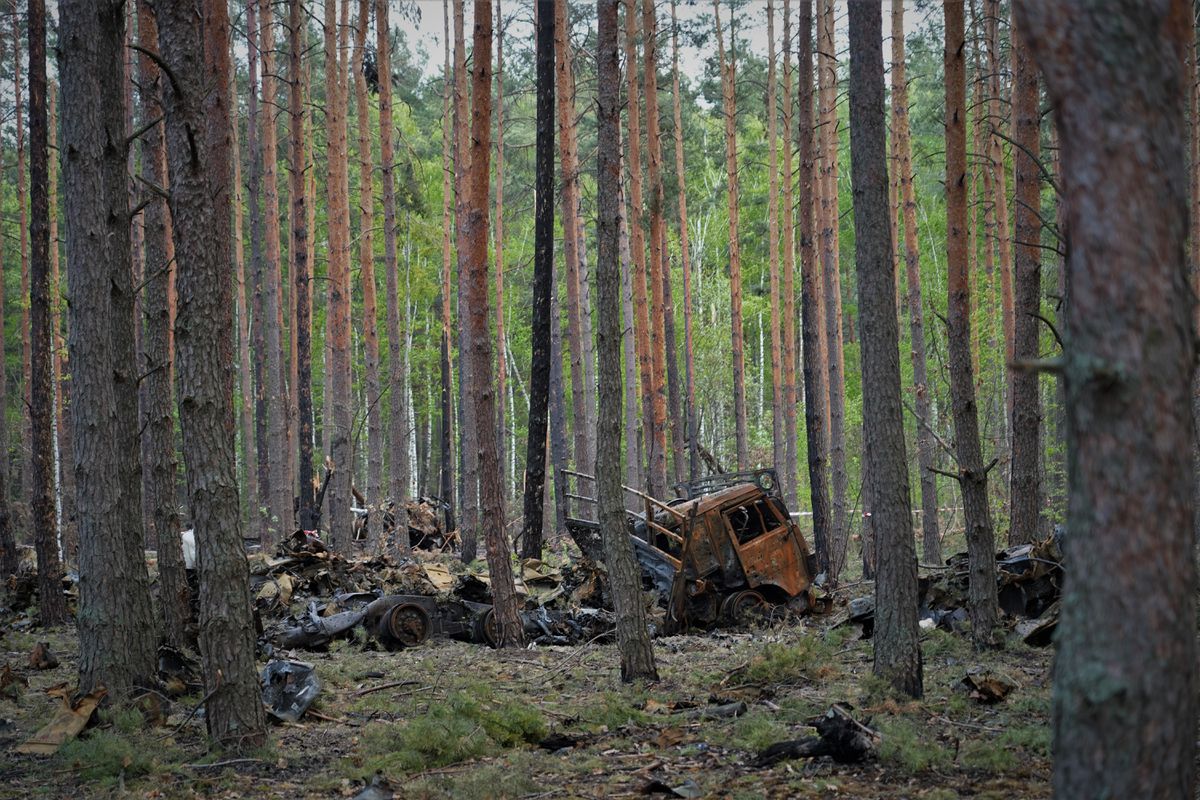 What begins as a simple walk through the countryside quickly turns into a scene out of Dante Infernos. Although it may seem like just another of the many forests that surround kyiv, it is the site of one of the Russian military’s greatest defeats in Ukraine. Not only did the Kremlin troops fail to take the Ukrainian capital after the February 24 invasion, but on the night of March 27 they fell victim to a violent counterattack. At 11 p.m., according to some residents, the local Ukrainian army destroyed part of the huge camp that the invaders had set up between the towns of Bucha and Borodianka.

The shelling was so intense that it wiped out everything within a radius of 200 to 300 meters. There is no information on the number of Russian soldiers deployed in the camp, but given its size – it spanned many hectares – it could have housed thousands of soldiers. None of the inhabitants of the region know how many soldiers died in the shelling or in the explosions caused by the strike. It seems that the corpses were the only thing the authorities took away.

At the beginning of the track leading to the site, there are traces of civilization. One might think that it was rubbish left by the campers: a boot, a piece of plastic, a piece of clothing, leftover food… A few hundred meters further on, the scenery changes and it is obvious that no camper could have been responsible for such debris. It is also clear that this is not a place for a leisurely stroll. Several signs nailed to the edge of the road warn of the possible presence of mines.

Huge trenches the size of garages begin to appear one after another. The ramps leading to them suggest that they were used to camouflage vehicles. Some of these holes, covered with logs and branches, have been transformed into underground bunkers. Some even still have sleeping mats. There are also hut-like structures, made of branches and tarps, which appear to have been used for toilets. There are more clothes and boots, makeshift clotheslines, green wooden and metal boxes. These contain ammunition. Through the pines, the first burned military vehicle appears. It is difficult to conceive what nature hides from us.

There is no trace of human life, only death. Two sticks tied together to form a cross are placed on a grave. “It belongs to a Russian soldier,” says Slava, a local who acts as a guide. Further on, there are six empty graves next to what appear to be the remains of other makeshift crosses. “They were Ukrainians and they were dug up,” he adds. These victims had a second, less undignified farewell. After a while, Slava says that the worst of the destruction is coming. Slava takes pride in being able to show proof of the Russian defeat, announcing it as if telling tourists at Notre Dame Cathedral that they were going to see the main attraction, the temple’s famous gargoyles.

But first, it was the washing machines, televisions and other household appliances that were devoured by the flames. “These are the remnants of what the Russians stole from houses and left behind,” Slava says with a hint of hatred. Other residents of Russian-occupied villages also say Russian troops looted their homes, sometimes even stealing clothes to fight the harsh winter weather and scraps of food to chase away their hunger.

The food, however, has reached this forest camp. Remnants of individual rations with the Russian army logo on the packaging can be seen strewn about. There is even a copy of the official Russian government newspaper Krasnaya Zvezda or Red Star Friday, March 18. “Vladimir Putin: We will fight for the right to be and continue to be Russia,” is the main headline on the front page, which appears alongside a photo of President Vladimir Putin. Other articles in the newspaper speak of Western fabrications “à la Goebbels” and the “historical roots of Ukrainian Nazism”.

Ahead of us, the attack left a circular clearing in the woods. Some of the trees are burned, others are cut in half or splintered almost artistically. And just a few steps away, the scene transforms into something out of a war movie.

Scattered across the forest are the charred remains of dozens of trucks and other vehicles. Some are a pile of junk. Others are more recognizable, but have been hit so hard by the bombardment that light streams through them like water through a sieve. Ammunition and shells of all calibers are scattered on the ground, as well as documentation that miraculously escaped the flames, remnants of uniforms, burnt metal trunks…

Russian forces had razed this area and occupied it for a month. When Putin failed to take control of kyiv, troops prepared to withdraw at the end of March. But a bitter farewell awaited them. It was in the midst of these preparations, on March 27, that the Russian troops came up against a violent counter-attack. According to Slava, it lit up at night as if it were daytime.